Remarks by Consul-General Jota Yamamoto
in the Reception to Kick Off Japan Cultural Relations
February 16, 2012

Honoured Colleagues,
It is a great pleasure for me to welcome you all as we celebrate together the opening of the Arts of Japan Gallery at the Museum of Fine Arts Houston.  It is an honour that the Japan Gallery is to be the culminating exhibit in an effort that began back in 2007 to expand Asian art at the museum, that will kick off the Japan cultural relations 2012.

I must thank Ms. Gwen Goffe, Ms. Christine Starkman, Ms. Valerie Greiner and all the staff of the Museum of Fine Arts for giving me this wonderful reason to bring all of us together tonight.  That we are all gathered here from many different backgrounds and professions speaks volumes to the diversity, richness and vibrance that is the culture of Houston.  I would also like to pay tribute to all the generous donors, who made this gallery possible.

I extend a special welcome to Mr. Masami Zeniya, Executive Director, Mr. Hiroyuki Shimatani, Vice Executive Director, Ms. Satomi Kito, Senior Manager of International Relations and Mr. Shinji Ito, Senior Manager of Education Programming of Tokyo National Museum who are with us from Japan.  It was remarkably generous of the Tokyo National Museum to help mark the gallery opening by sharing with people in Houston, National Treasures and Cultural Properties of Japan that will be on display during the grand opening.  They surely represent the “elegant perfection.”

Also in connection with the Museum opening, internationally acclaimed professional musician, Ms. Akiko Yano: welcome.  I very much enjoyed your performance last night and look forward to the chance to hear you perform again tomorrow night.  I wonder if you could take some rest at all this evening.

Welcome to Madam Franci Crane.  I miss Mr. James Crane this evening but it is fabulous to receive you tonight.  I congratulate Mr. Crane’s reassuring initiatives upon the Houston Astros, and I am sure that you will nicely mastermind your husband towards the good success of our beloved team.

In the other half of the state, the Texas Rangers have signed on Yu Darvish, a prized Japanese pitcher.  This season will be the last chance for the World Series to be fought between the Astros and the Rangers.  Like any other Japanese, or American, I need two or three hours for talking of baseball, but I shall stop here for the moment, and will get back to the Astros, some ten minutes later.

Together with Madam Astros, we also welcome this evening Mr. Astronaut, the great astronaut Mr. Leroy Chiao and his wife.  I applaud you for your commitment continuing on in the field of science and space technology following your career as an astronaut.  You personally understand the importance of combining brains and talents from all countries to ensure the best result.  In response to such spirit, seven Japanese Samurai astronauts are now actively engaged in NASA activities, pursuing their dreams towards outer space.

Welcome to Mr. Glen Gondo of Gondo Company, who is a representative business giant that uses his power and influence to strengthen our communal bonds.  Just last week, Mr. Gondo’s generous support made possible the success of the 2012 Houston Regional Japanese Speech Contest.

Consul-General & Mrs. Cho, I thank you for joining us.  I know so much how active you are in promoting Korean values, Korean culture in particular.  At last, my country can catch up with your country in galleries in the Museum of Fine Arts Houston.  History tells us that Japan has imported a lot of cultural values from Korea and now is the time for me to learn a lot from your skills and know-how to keep the gallery in good shape as the Arts of Korea Gallery.

I also welcome Mr. Merle Bratlie and Ms. Rebecca Zabinski from the Houston Symphony.  I have been so impressed with the quality of the Houston Symphony, a typical dynamic, full-house orchestra.  Even such an energetic Russian pianist Kirill Gerstein had to compete so hard with the power of your symphony.  Please convey my best regards to Director Mr. Hans Graf.

Mr. Kunio Minami, Hermann Park Conservancy Board, and Ms. Minami: welcome and thank you for joining us.  Your tireless effort to continue the tradition of keeping Hermann Park’s Japanese Garden has always ensured us the window to Japanese culture for the people of Houston.
Dear Colleagues,

For the past five years, a Japanese garden designer, Mr. Terunobu Nakai, has devoted his voluntary works to keep the shape of the Japanese Garden.  For his achievement, Madam Annise Parker, Mayor of the City of Houston proclaimed October 27, 2011 Terunobu Nakai day, and on the occasion of celebrating the Emperor’s birthday last December, I, in my capacity as the Consul-General of Japan, commended Mr. Nakai.

Despite voices of encouragement and his own wishes to come back to Houston, Mr. Nakai passed away early this year in Japan.  He could not come back, but his beloved disciple came back to take care of the garden this month.  He could not come back, but his dream for the garden shall be kept alive forever.  To make it most certain, I hope that Mr. Minami will give us the continued orientation.

This year 2012 marks 100 years since Japan gifted the American people the cherry blossom as the symbol of friendship.  To commemorate it, we now plan to give baby trees of cherry blossom in some parts in the States.  If it could be done in the Hermann Park’s Japanese Garden, it may be nice for us and will please the late Mr. Nakai.  Let me try to make it happen.

Last but certainly not least the Harris County Judge the Honourable Ed Emmett and his wife, welcome!  It is the honour to have you present with us.  I share a bit of sympathy with you, as it may be extremely tough to govern and orient the people, so diversified, energetic and powerful, the kind of people in this room tonight.  But you have always extended the sense of safety, both in peacetime and emergency, both to indigenous and foreign people in the county.  Thus, cultural prosperity and diversities are made possible.  We rely upon you, the Honourable Emmett.
My dear Colleagues,

In addition to the Museum of Fine Arts to open the Arts of Japan Gallery, we will not have long to wait for another reputable arts center.  Asia Society opens its Texas Centre in April.  The very building itself is a work of art and I am honoured that it was designed by Japan’s own renowned architect, Mr. Yoshio Taniguchi.
We will hold the Japan Festival in Hermann Park on March 31st and April 1st.  Through the whole year, we will celebrate the Chiba-Houston Sister City Partnership entering its 40th year and the centennial of Japan’s cherry blossoms in the States.

I invite you to join in the celebration of Japan this year in whatever way that you can.  Our community has done an excellent job thus far, but there are always a lot of possibilities to further enhance the sense of collaboration. You are all leaders in you fields, and I so look forward to brainstorming together what more we can do for consolidating our common values.
Thank you. 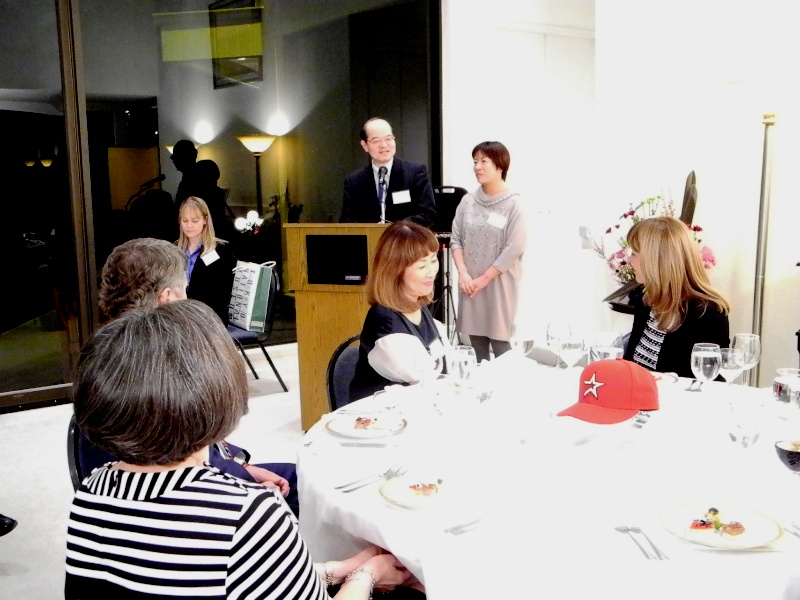 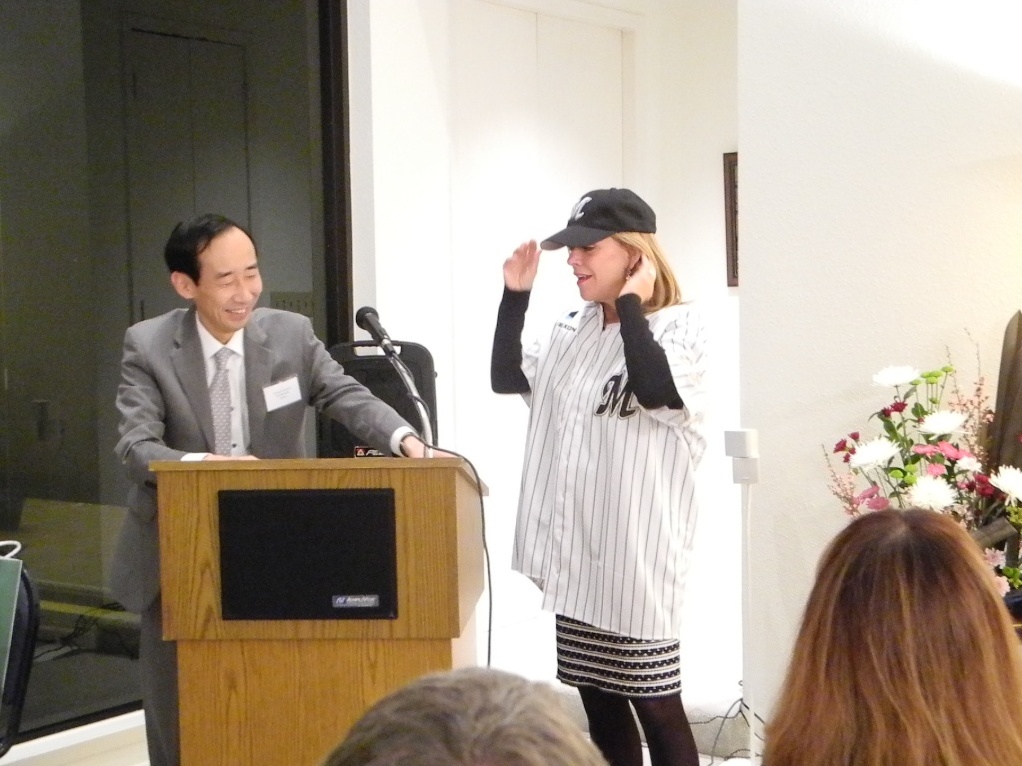 Thank you to give me the floor again.  Now I have the honour to invite  Madam Franci  Crane to give us some words.  But first, let me introduce the letter of the Honourable  Toshihito Kumagai, Mayor of Chiba City of Japan, addressed to Mr. James Crane.

In his letter, Mayor Kumagai congratulates Mr. Crane on his appointment as the owner and chairman of the Astros, refers to the sister city relationship between Chiba and Houston with this year the 40th anniversary: the partnership is now expanded to include economic cooperation to encourage companies to pursue ventures in the two cities with tailored support and assistance.

And the Mayor wrote:
“ Like Houston, Chiba City is the hometown of a professional baseball team, the Chiba Lotte Marines.  In addition to the ties above, I hope that our cities will foster an abiding friendship through a mutual love of baseball.  To that end, I have enclosed with this letter a uniform and baseball cap from the Marines, as well as daruma doll, a traditional Japanese symbol of perseverance in the pursuit of one’s goals.

On behalf of the 960,000 residents of Chiba City, I offer my hopes that they will bring you and the Astros the best of luck in the upcoming season.”

So I have the privilege to pass his letter and gifts for you.  Number 26 on the uniform is meant to be the fans & supporters, we call them the 26th player always together with 25 players in the dug-out.  Now you and Mr. Crane can count me as well as the Mayor and the people of Chiba City as the 26th player always standing with the Astros.