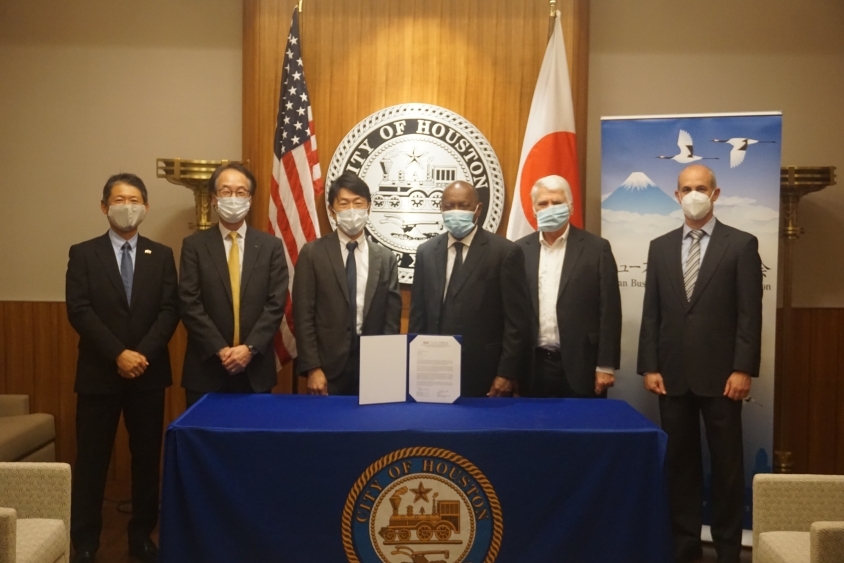 On May 18th, Consul-General Fukushima, acting in his role as the Honorary Chairman of the Japan Business Association of Houston (JBAH), visited Houston’s Mayor Turner, together with JBAH President Yoshihiro Shiraiwa (President of Mitsubishi Heavy Industries America) and JBAH Advisor Yuzuru Nagawa (General Manager of ANA’s Houston Office), to announce that JBAH will be donating $50,000 to local coronavirus relief efforts.

Two separate donations valued at $25,000 each will be made to the Greater Houston COVID-19 Recovery Fund and the Harris Health COVID-19 Response Fund to aid local residents affected by the spread of the virus and support healthcare workers at the forefront of the fight against the disease. Both donations will be made by JBAH with contributions from its constituent companies and individual members as well as additional participation coming from the staff of the Consulate-General.

Consul-General Fukushima spoke to Mayor Turner about the local situation, noting that the virus has been slow to spread in the Greater Houston area relative to other parts of the country, and mentioning that no members of the region’s Japanese community have been infected. This, he said, was thanks to the Mayor’s decisive leadership and the tireless efforts of medical personnel and essential employees for whom local Japanese residents and businesses are deeply grateful. The Consul-General expressed his resolve that Japan will always stand by Houston in troubled times, and his hopes that these funds, which are currently being collected from JBAH members, will soon aid the region’s immediate relief efforts and long-term recovery.

Mayor Turner responded by expressing his sincere gratitude for the support. He said he was happy to meet with the leadership of JBAH, and praised the organization for the friendship it has offered and contributions it has made to the local community for over 50 years. The Mayor went on to say that he truly valued Japan’s partnership with Houston, and hoped to work together on overcoming the current difficulties to build lasting cooperation for the future.

Together, both sides reaffirmed the strong relationship between Japan and Houston, and expressed a shared belief that it will grow even stronger as they work to overcome the challenges posed by COVID-19. Both sides also agreed to reschedule Mayor Turner’s official mission trip to Japan as soon as the global public health situation will safely allow.